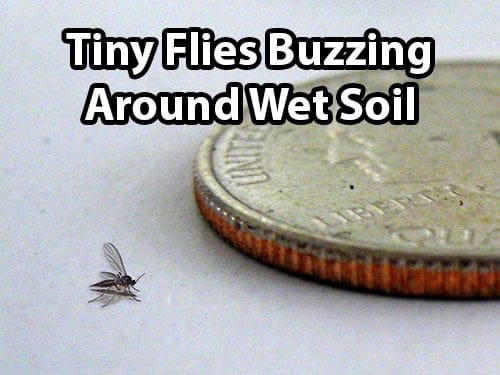 Fungus gnats look like tiny flies buzzing around cannabis plants, especially around the soil. Their larva grows in wet soil, and they often appear when the topsoil stays wet for too long between waterings. 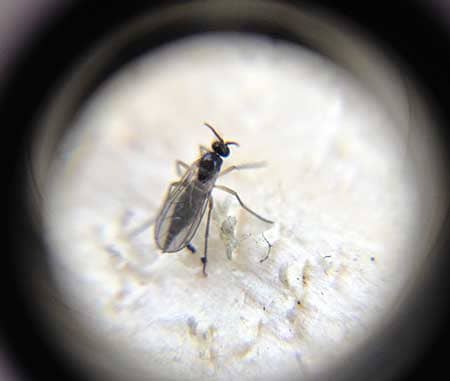 How to Get Rid of Fungus Gnats:

A fungus gnat is so small it’s thinner than the width of a quarter. They commonly appear when cannabis plants are watered too often. If you let the top inch of your soil dry out before watering your plants each time, fungus gnats often naturally go away on their own. However, if you have a really bad infestation, it can take weeks of good watering practices before you get rid of all of them unless you also do something to directly kill the bugs and bring down their numbers. Read on to learn how to get rid of fungus gnats on your cannabis plants for good!

Fungus gnats – how do you get rid of these tiny flying pests that lay eggs in your soil? This article will teach cannabis growers (like you) exactly that: how to completely eradicate fungus gnats and ensure they never come back!

Fungus gnats are a common problem for soil cannabis growers (especially those who overwater their plants!), but they’re actually easy to get rid of once you know what to do!

How Big Is a Fungus Gnat?

Fungus gnats are small, only about 2 mm long. To give you an idea of how big that is, 2mm is about the thickness of a quarter.

Despite their small size, fungus gnats can be a big nuisance in your soil cannabis grow, mostly because their tiny maggot/larvae offspring will hurt your plant’s roots (which will cause problems for your plants).

Fungus gnat larvae eat fungus or decaying matter and need wet conditions to thrive. It is common for soil growers to overwater their cannabis plants, and wet soil is the perfect home for fungus and decaying organic matter. After fungus has grown (often invisible to the naked eye) or overwatered matter has begun to decay in the topsoil, fungus gnat lays their eggs in the top layer of wet soil.

These eggs hatch into larvae that look like tiny maggots which only live in the top 2-3 inches (5-8 cm) of soil. The fungus gnat larvae are the culprits which cause damage to cannabis roots.

Cannabis roots are not the main source of food for fungus gnat larvae, but roots get caught in the crossfire. Although the main diet of fungus gnats is fungus and decaying matter, the larvae happily gnaw on root hairs and young tender roots of cannabis plants.

The damage to the roots from these little suckers cause problems in the leaves and slowed growth. A bad fungus gnat infestation can even kill cannabis plants, especially young seedlings.

While the main problem is that fungus gnat larvae attack the roots of your cannabis plants, the adult fungus gnats can also spread diseases (such as pythium: a common cause of root rot) via their feet.

Because of these problems, it is important to get rid of a fungus gnat infestation right away.

If fungus gnats need fungus and decaying matter to survive, where is the fungus coming from? Fungus grows in wet conditions and is an essential part of the environment (where it breaks down organic matter like dead leaves). Fungus spores are around us everywhere pretty much all the time, but these spores will never start growing without moisture. Warm and wet conditions in the soil of a
cannabis grow are what cause fungus to grow and matter to decay. Sometimes you won’t even be able to see the fungus or decaying matter with the naked eye. But once the conditions are right, fungus gnats thrive in the top
layer of your soil whether you can see fungus or not.

Do You Have Fungus Gnats?

1.) Tiny flying black bugs around your plants & crawling on your soil

Even if your plant or leaves aren’t showing symptoms or distress yet, if you see fungus gnats it means that you have a problem with fungus and moisture in your soil. Don’t let the infestation get out of hand. It’s always recommended to get rid of any pests in the grow room as soon as you know they’re there!

This video shows you what fungus gnats look like, and also go over how to get rid of them (or just read the rest of the article!)

The adult fungus gnat flies are just annoying (and gross); they don’t bite you and don’t do much to hurt your plants directly besides spreading disease. But even though the mature fungus gnats aren’t a huge threat to your plants, the presence of adult gnats lets you know that your cannabis soil has been infested with their maggot offspring which causes the real problems.

2.) Tiny white or translucent larvae with black heads in the soil

Note: this picture is really big so you can see what you’re looking for, but the actual larvae/maggots are TINY. If you spot them, you’ll just see tiny white spots wriggling around in the topsoil.

It’s the fungus gnat larvae in the soil that damage your plant roots and cause growing problems, especially to seedlings or young plants.

How Fungus Gnat Larvae Cause Damage to Cannabis Plants

Larvae attack tender new plant roots and root hairs, which cause these problems:

Quick Check! Make sure you have fungus gnats and not fruit flies.

Fruit flies are brown/yellow/orange while fungus gnats are dark brown or black. Fruit flies tend to be bigger/fatter and easier to see than tiny fungus gnats. You need to take a slightly different approach with fruit flies.

Fruit flies will keep coming back if there’s ripe or rotting fruit to eat. If you’ve ever left a banana or other fruit on your counter too long, you’ve probably noticed how fruit flies seem to be able to appear out of thin air if there’s ripe fruit around.

Fruit flies can start buzzing around poorly composted soil which contains kitchen scraps, but otherwise, fruit flies are uncommon in the grow room unless there’s ripe/rotting fruit or other tasty bits for them to eat.

So once you get rid of their food, the fruit flies will disappear.

Pics of Damage to Cannabis Plants From Fungus Gnats

A fungus gnat infestation on your cannabis plants can cause all sorts of strange problems â€“ often they look like overwatering, pH problems or nutrient deficiencies. The more fungus gnats you have, the more likely you’ll see damaged leaves and reduced growth rates.

Since fungus gnats are almost always caused by overwatering and too-wet topsoil conditions, some of these symptoms may actually be caused by too-wet soil. In any case, when you see fungus gnats, it means there’s a problem in your setup that needs to be addressed.

Here’s some pictures of cannabis plants affected by a gnat infestation. Notice how the leaves don’t look healthy (there’s yellowing, spots, curling, etc). It’s almost impossible to tell that you have fungus gnats just by looking at the leaves of the plant because it can cause all sorts of different symptoms.

What To Do If You Have Fungus Gnats in Your Soil

Most importantly, don’t overwater your plants! Never water cannabis plants grown in soil until the top inch of soil feels dry (up to your first knuckle). Fungus gnats need wet topsoil conditions to grow and thrive. The most common reason growers get fungus gnats is overwatering their plants.

While the steps below will help you get rid of your fungus gnats quickly and effectively, the gnats will almost always go away on their own if you simply stop overwatering your cannabis plants. When there’s no fungus, there’s no fungus gnats, and both need wet conditions to grow. But if you already have them, here’s how to kick them out of your grow area.

Get Rid Of Fungus Gnats Quickly: What You Need

But the most important reason to use yellow sticky cards is to help you keep track of how bad the current fungus gnat infestation is. As the infestation is reduced, there will be less adults caught in the yellow
sticky traps. That’s how you know that your approach is working.

Get Yellow Sticky Cards on Amazon


2.) Get a fan blowing air over the top of the growing medium. This helps dry out the top layer of your soil, and also helps prevent the fungus gnats from being able to fly around and
lay more eggs.

Get a Tabletop Fan on Amazon


3.) Don’t water your plants for a few days. You want to begin drying out the soil to kill as many larvae as you can before you apply a treatment (which will involve
watering). Fungus gnat larvae need a warm, wet environment near the surface of your soil to grow. Even after you’ve gone through all these steps and believe fungus gnats are gone, make sure to avoid overwatering plants,
as this is the most common reason growers get fungus gnats in the first place. Don’t do the next step until the top few inches of soil has dried out

4.) Kill the Larvae in The Soil Learn about â€œgood bugsâ€ that kill Fungus Gnat larvae below

5.) Avoid overwatering your cannabis plants from now on. Never water your cannabis plants in soil until the top inch or two of soil has dried out.
From now on, you don’t want to ever let the top part of soil stay wet to create a breeding ground for fungus and fungus gnats.
How often do I water my cannabis plants? Until the fungus gnats are gone, let your plant dry out a lot more than normal
between waterings, and then you can go back to a normal watering schedule.

6.) Keep your sticky yellow cards up until Fungus Gnats are completely gone. These yellow sticky cards will continue killing adult gnats. They’re also
helpful because they will alert you to whether fungus gnat numbers are rising or falling. Even after killing all the larvae, it may take a few days to a few weeks before the adult fungus gnats are completely gone and you stop
seeing new gnats caught on your sticky cards.

What is bacillus thuringiensis var israelensis?

This type of bacteria produces a toxin that hurts the larvae of fungus gnats and prevents them from being able to eat (it also kills mosquito larva), but doesn’t affect your plants or roots. Products that contain this
bacteria are sometimes listed as â€œBTâ€ or â€œBTiâ€ (to indicate the subspecies israelensis â€“ which is particularly effective
against fungus gnats). It is also safe for fish, pets, humans and pretty much everything besides larvae. It is safe for organic grows, even in the middle of the flowering/budding stage, and won’t hurt other
microbes living in the soil.

While bacillus thuringiensis is probably the best way to naturally kill fungus gnat larvae, you can use other biological control methods to kill these maggots. The following options will help
control fungus gnat infestations but will likely not completely get rid of them unless you stop overwatering your plants.

Growing Organic? The ‘brute force’ methods above (SM-90 or Hydrogen Peroxide) will kill the fungus gnat larvae, but will also kill many beneficial microbes in the soil. You can add beneficial
microbes back, but it will take a while for them to repopulate your soil. This problem only really affects organic soil growers. If you’re providing nutrients to your plants with bottled nutrients,
you’re already providing nutrients in a way that your plants will be able to use even if the microbe populations are down. In any case, if growing organically, an organic version of bacillus thuringiensis (subspecies israelensis) is the best option for getting rid of fungus gnats.