Problem: Calcium is an important nutrient that helps provide structure to the cannabis plant and helps it withstand stress like heat. When your cannabis plant has a calcium deficiency, the main symptom that you’ll be able to notice is brown or bronze splotches or spots on your leaves. Occasionally the splotches may appear purple especially under LEDs.

Under LED grow lights, calcium deficiencies may appear purple at first. Later in the flowering stage, it’s normal for leaves to become more colorful, but if all the hairs are still white it’s too early
for leaves to be discolored (leaves that lose their green too early can’t photosynthesize as well which can reduce yields). Normally when you see something like this it’s because the pH is too low. 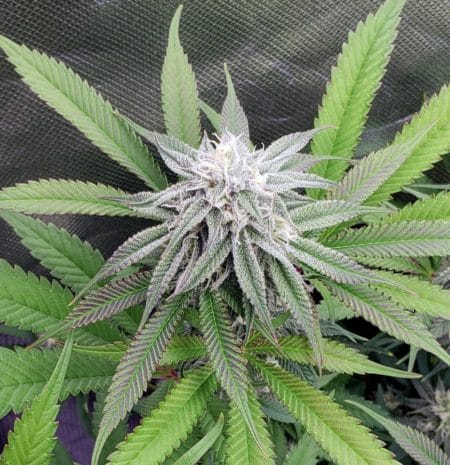 Calcium moves relatively slowly through the plant (it is a semi-mobile nutrient), which means it tends to stay put after it’s been given to a leaf. It tends to showup on leaves that are
actively growing and getting some amount of light.

Calcium deficiencies most often showup in the following places:

Found near the top of the plant under the light

This lower fan leaf is mostly in the shade, but the calcium deficiency appears near the edges that are getting light. Calcium deficiencies often show up onparts of the leaf that arestill actively growing.

Some of the most noticeable signs of a calcium deficiency will appear on newer or growing leaves which may display:

Here’s a close-up of a calcium deficiency that appeared on leaves towards the top of a cannabis plant grown in coco coir: 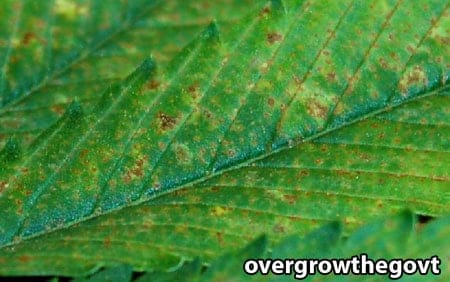 Other Symptoms of Calcium Cannabis Deficiency

If a cannabis plant is affected by a calcium deficiency for too long, it may begin to show the following symptoms due to the lack of calcium.

Cannabis tends to like high levels of calcium, so it is unusual to feed too much calcium when using normal amounts of nutrients and/or regular soil. There are not many known cases of cannabis calcium toxicity (too much calcium), however too
much calcium can cause the plant to lock out other nutrients, so it’s important not to go overboard..

Calcium deficiencies are more likely to appear when¦ 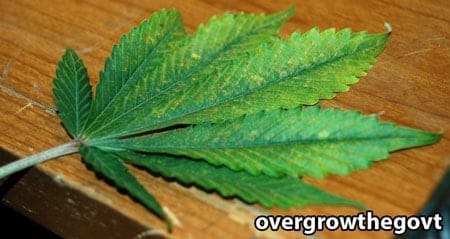 Different strains of cannabis tend to have different nutrient problems. Some cannabis strains (or even specific plants) tend to use much higher levels of calcium than others, and so you may see calcium deficiency problems with one plant
even when all the other plants (which are getting the same nutrients and environment) aren’t showing any signs of deficiency.

Solution For Calcium Deficiency in Cannabis

Your cannabis plant may show signs of a calcium deficiency if the pH at the roots is too high or too low. That is because when the pH of your root zone is off, your cannabis cannot properly absorb calcium through its roots. Therefore the
first step is to ensure that you have the correct pH for your growth medium. Learn more about pH and cannabis.

Please note: After a calcium deficiency is cleared up, the problem (brown spots and unhealthy new leaves) will stop appearing on new growth, usually within a week. Please note that leaves which have been damaged by a calcium
deficiency will probably not recover or turn green, so you want to pay attention to new growth for signs of recovery.

If you suspect your growing cannabis plant has a calcium deficiency, flush your system with clean, pH’d water that contains a regular dose of
cannabis-friendly nutrients that includes calcium. This will remove any nutrient salts that may be affected the uptake of
calcium and help restore pH to the proper levels.

To supplement with extra Calcium¦ (it’s very rare to give a cannabis plant too much calcium, however, too much calcium can lock out other nutrients so
don’t go overboard)

Calcium and magnesium deficiencies often appear together in cannabis. Many growers decide to purchase some sort of Calcium-Magnesium (often called Cal-Mag) supplement for their grow room in case this common deficiency
appears.

Listed below are common cannabis Calcium supplements, along with some general information about each one. After supplementing with Cal-Mag and correcting the pH, you should expect to see new healthy growth within a week. Remember, the old
leaves will probably not recover, but new growth should be green and healthy.

CaliMagic is Well Suited For Hydro, Coco Coir, or Soil

General Hydroponics CaliMagic is a calcium and magnesium plant nutrient supplement. General application is to mix 1 tsp (5ml) of CaliMagic into each gallon of water. I have used Calimagic several times with great results.

If you’re looking for a way to supplement calcium in your organic or soil setup, I highly recommend a product called Dolomite Lime.

Dolomite is a good source of calcium and magnesium and can be mixed with your soil. The great thing about dolomite is it works slowly over the course of a few months.

Dolomite has a neutral pH of about 7.0 and will help keep soil at the correct neutral pH range which is optimum for cannabis growth.

You can buy
Dolomite Lime online, but
with shipping, it’s almost always waaaay cheaper to pick up a bag at a home improvement or gardening store such as Lowes, Home Depot, gardening centers, etc. If possible, try to get a finer grade of dolomite compared to
something that is more coarse.

How to Use Dolomite Lime for Cannabis: When growing cannabis indoors, add 6-7 teaspoons of fine dolomite lime to each gallon’s worth of soil. So if you’re mixing enough soil to fill a 5
gallon container, you want to add 30-35 teaspoons (about 2/3 cup) of dolomite lime to the mix. Mix the dolomite lime and the dry soil thoroughly, then lightly water it with water that has been pH’ed to 6.5. After getting
the soil wet, mix the soil well and wait a day or two to let the soil settle before checking the pH and adding plants. When growing in an outdoor garden, follow the dolomite lime manufacturers instructions. 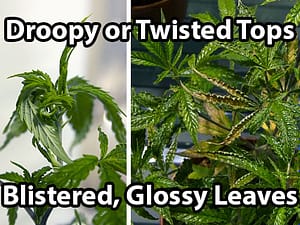